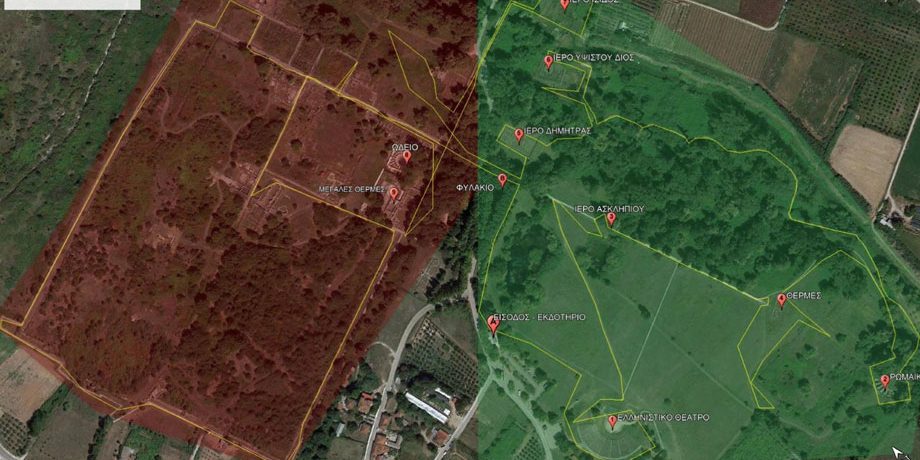 As part of the XENIOS project, the Creative People team visited the archeological park in Dion in June 2020. More specifically from June 15th to June 19th of 2020. The purpose of the visit was to study the wireless network coverage needs in the park and to identify particularities of the site that could adversely affect communication between the site and the XENIOS system.

The following article is part of the test timeline planned and carried out during our visit to Dion with a view to achieving communication of network equipment in the field.

The main problems we faced were the dense high vegetation and the lack of visual contact between points, either because of vegetation, or because of soil unevenness. These problems were addressed and resolved on a case-by-case basis and are mentioned below.

The flora of the region varies by season. The density and color of the foliage, humidity and temperature vary during the year and certainly affect the yield of the coverage. In our study we have taken into consideration the greater range of these variables, with a view to approach the most ideal interconnection and topology of equipment available in the field.

The lack of power-outlet points in the field was a particular difficulty we had to take into account. This is why we designed and deployed mobile 12/24VDC rechargeable power supply units, built in Creative People, in accordance with safety standards, to avoid any risk to the environment or to equipment operators.

The only factor that we have not been able to simulate in the study is human interference in the morphology of the site (landscaping works, future structures, etc.).

Our arrival to the archeological park, was followed by a field inspection to the site, aiming to the understanding of its geomorphologic specificities, as well as of noting down other factors, which we should consider when performing the tests.

Map 1.2, main points of interest of the park and full route.

As main points of interest (see map 1.2) were designated:

The site’s morphology offers a variety of tour combinations, as there is no specific tour path.

We have therefore chosen a 4.2 km route, covering most of the Sanctuary, as well as part of the Ancient City site, including the Conservatory, the Great Thermal baths and part of the southern Wall.

Most of the area has increased humidity and even on the warm days of June, the soil in several places is still wet.

On the following map 1.3, blue color depicts the route for which the coverage study was carried out.

On the second day, the first interconnection test was performed between the base and the eastern point of the Isis Sanctuary.

The two points cannot be interconnected. The problem is the dense vegetation, which interferes between the 110 meters distance of the two points.

A test was then performed between an ENTRANCE and a point in front of the Thermal Baths.

The third interconnection between point A (ENTRANCE) and the outhouse near the Sanctuary of Asclepius was successfully established. The distance between the two points in -an imaginable straight line- is 250 meters and very few trees are interfering between them, which does not affect their stable interconnection.

The interconnection quality and coverage performance between point A (ENTRANCE) and the outhouse remained constant throughout the tests.

In this particular case, we have logged interconnection quality measurements of the mobile point in a wide area relative to the base at various points, in order to achieve its optimal placing.

The quality of interconnection and coverage of this point was studied in detail. The reason is that this point will also take over the relay-interconnection with a transmitter, which will be placed on a platform, located at the Sanctuary of Zeus, next to the bridge destroyed by flooding, covering the area of the Isis Sanctuary and the Zeus Sanctuary.

Extensive testing was carried out at selection points to identify the most ideal ones. Tests were then carried out, with varying mast heights at both points, mainly to avoid interference from visitors’ passage, until the desired level of interconnection and coverage was achieved.

The distance between the points is 149 meters with altitude difference. The interconnection has been established and is stable with satisfactory performance. The coverage is quite good in both areas, Sanctuary of Zeus and Sanctuary of Isis.

A serious factor we should take into consideration is the vegetation variations in the site, either during the year due to changes in meteorological conditions, or due to human intervention, which are intended to clean up and ensure the safety of the site.

With quite a large amount of data collected on day 2, we can now determine the final points at which the equipment will be temporarily installed for the testing and pilot of XENIOS.

The ISP (Internet Service Provider) line capability at the site of Dion does not exceed 3Mbps Download and 0.6Mbps Upload, making it very difficult to correctly transmit data to XENIOS’s Cloud platform, let alone provide free wireless network access to the internet for visitors. This issue will be partly resolved by using additional 4G LTE equipment installed for testing purposes.

The next area to test coverage selected was the Conservatory, where the Wall and the Ancient City begin.

This is the last test point, which is 235 meters away -in an imaginable straight line- from the ENTRANCE.

The interconnection was successful and stable. The coverage quality is very satisfactory and is benefiting from the open field, which extends north-east of the Conservatory, as well as from the elevation advantage.

On the morning of the 3rd day at the site, we met with the Archeological’ s Park archeologist in charge, and we were guided around the area of the Sanctuaries and part of the Ancient City. We were pointed out which are the points of the highest danger, and we discussed whether or not they can be covered.

Equipment has been installed at the optimal locations selected (see map 1.5) and put into fully operational mode, in order to perform a test, simulating a visitor on various points.

For this test, a random path has been chosen in the predefined areas by making small stops near points of interest and using mobile devices to simulate a visitor tour in the area.

The total distance, walking in the site for this trial, exceeded 5 km.

During the 3rd day tests, the weather was mild rainy for about an hour. Stability and quality of coverage were not affected.

During the field tests we noticed that the coverage between the bridge and the platform at the path near the Sanctuary of Isis is unstable, due to elevation difference combined with dense vegetation that surrounds the site.

The equipment has been put into fully operational mode for a repetition of the test.

The measurements confirmed the data, collected on day 3, involving stability between interconnected points and coverage quality. In addition, connection tests have been performed on the XENIOS network with different mobile devices (mobile phones and laptops) to confirm that there is no great discrepancy between devices and measurements.

Due to very low ground connection speed provided by the ISP at the site of the Archeological Park, 4G LTE equipment was tested to establish a more stable and rapid connection between the equipment and the Xenios Cloud Platform.

Following the test equipment interconnection with the XENIOS platform, indicative data collection and dispatch tests between equipment and platform were performed. Furthermore, the visitors ticketing system (ENTRANCE – EXIT) were tested and data was sent successfully to the XENIOS system.

Upon the end of the interconnection tests, a final backup of the configuration along with the exact locations of the equipment involved were performed.